This is a guest post by blogging buddy Doc Z of zorlone. Here he shares his observations, commentaries and frustrations on his daily travel on the streets of the congested Metro Manila.

Question: What are the things I hate to see on the road on my way to work?

1. While backing up, motorcycles and jeepneys would rush behind me.
2. Pedestrians cross without looking left or right.
3. A jeepney would stop in a U â€“ turn slot and let a passenger off the island!
4. The vehicle on my left lane would swerve in front of me to go to the right lane.
5. Smoke belchers.
6. Tricycle drivers giving me the evil eye after they try to steal my lane.
7. Too many one-way streets!
8. Jay walking.
9. Flashing headlights to signal that the car behind me wants to overtake.
10.Drivers rubbernecking!

Sundays and holidays are the best days to drive around Metro Manila. Youâ€™d be surprised to reach Makati from Malabon in less than forty minutes. Donâ€™t ask me if itâ€™s doable because it is. I didnâ€™t say that just to brag. Of course, itâ€™s a totally different story on a weekday. Oh, you get the idea.

Going to work with a smile

Yep, you read that right. I usually plug in my ipod earphones and turn the volume up while driving (#1 cause my car stereo doesnâ€™t work and #2 the honking of horns is muffled on top of a loud alternative rock music).

The faces of the pedestrians all seem the same to me: Rushing to work, anxious, and dreadful to be late.

I wouldnâ€™t want to be in their way or Iâ€™ll pointlessly get hit like a punching bag.

Driving seems so relaxing with music playing even if you snake your way through traffic. Ahâ€¦ may the bravest driver take the lead! But, donâ€™t force yourself when you are neck to neck with a jeepney, they are the bravest of them all, taxi drivers are just second (by my standards).

A carefully guarded secret in driving is that beauty trumps brawn. I learned this from a good â€œfriendâ€ of mine one traffic jammed night a longâ€¦ long time ago.

We were going back to the hospital (where I parked my car, she was driving) when we had to cross a busy intersection. It was nighttime and her car had a really dark tint. A jeepney driver tried to cut her from the left. The light was green on our lane so, technically we had the right of way. This driver was adamant and made an attempt to get closer. She simply rolled down her window, showed her lovely beautiful goddess of a face, then the jeepney backed up. I saw this driverâ€™s jaw fell embarrassingly open. (Letâ€™s say, a swarm of flies would have been able to get in.) Then my friend stepped on the gas and headed our way.

I was chatting with Jan Geronimo and Holly one time when we talked about â€œdonorcyles.â€

Apparently, Jan rides his motorcycle to work. It was Holly who coined the term donorcycle for us. Of course, a responsible driver like Jan only drives up to 20kph. I realized how right Holly was, knowing that there were a lot of comatosed patients from accidents that involve motorcycles from my emergency room rotation.

I just canâ€™t help but think that these people had too much adrenaline pumping through their veins that they would ignore the danger of getting pinned while trying to overtake bigger vehicles on the wrong side of the road.

I had mixed reactions when I drove my US based Aunt one night from the airport when she visited years ago.

We were both hungry, tired, and sleepy (my trade mark) that night on EDSA when there was a seemingly endless stretch of traffic along Guadalupe up to Shaw Boulevard! I applied all the tricks I learned from my Aunt, then, twelve years of driving skills when she finally said, â€œLor, if doctoring doesnâ€™t work out for you – you can still be a cab driver in New York,â€ jokingly. We both laughed as we compared how different drivers here and in the US were. At least I didnâ€™t fall asleep following the tail of some slow moving truck in front of me.

Even with a lot of cutting lanes, swerving and power tripping, whatever you may call them, there were still a lot of disputes that didnâ€™t end up into a full blown violent encounter among drivers. Hey, that was just me saying the obvious and quite happily, some foreigner agreed. Unfortunately, there are still some accidents out there, but it is still relatively safe to drive around the Metro. With or without these driving skills, people donâ€™t get out of their cars and start shooting each other.

Question: What I would really want to see on the road while on my way to work?

Answer: A clear stretch of asphalt road to drive on. 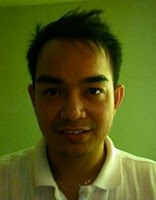 Doc Z is the uber blogger and poet behind zorlone.blogspot.com. He is a medical doctor by profession and juggles between his time on his clinic attending patients are his fondness of playing badminton and blogging. His blog is also one of those widely nominated blogs on Ms. Janette Torralâ€™s writing project, Top Ten Emerging Influential Blog of 2009. Check out his blog and if you are not yet done with your list, Zorlone could be the blog you are missing.