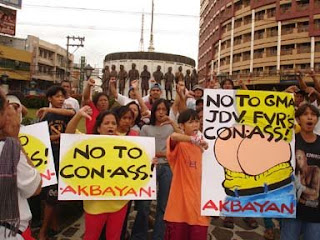 Don’t worry, my title post is actually right. “Don’t vote on 2010…”, but if i may continue, all those f**king congressmen who railroaded the amendment of the constitution by filing a bill to convene a constitutional assembly without recognizing the Senate as a separate voting entity, while everyone was still fixed on their computers watching Katrina and Hayden’s sex scandals.

Now I am angry!

Don’t Vote for all these Con-Ass Holes for God’s Sake!

So guys, while others would be rallying tomorrow converging at Makati City to protest in one loud voice the blatant act of our congressmen of not recognizing the voice of those people, maybe let us all also do our part too… I personally make an appeal to all friends and strangers.

Mark the faces of all the traitors and come 2010, never ever put these con-ass holes on your list of officials to be voted for the next couple of years. Now, this no more a civic duty of putting away friends from getting addicted to making sex scandals as I appealed to all of you on my list of influential bloggers, but this is one divine duty that would make its mark today and on many generations to come.

Here is the list of all the Judases on the congress who voted for the convening of the constituent assembly while we were all asleep. Memorize their faces, and maybe, one of them is your beloved congressman.

For sure, some of them will jump off ship in the coming days because of the strong clamor of the public of throwing all these weeds to the burning pit of hell. But guys, let me also remind you…when they jump off ship and become somewhat like an angel; withdrawing their names and sponsorship of the Con-Ass bill, appearing on interviews crusading against the same bill that has fattened their pocket; and becoming maybe an opposition or a silent dissedent; let me remind you: DON’T TRUST THEM! They are still wolves under their as white as snow sheep skin. If they had betrayed us once (impeachment complaints against GMA, where they received bribes from the palace on paper bags) and twice (by passing the bill calling for the Con-Ass while we were all busy watching the sex scandal), they can betray us many more times in our lifetime. Let us all kick their hairy ass come May 2010!

Remember: DON’T VOTE FOR THEM, come May 2010 elections. Tell all your family members, relatives, friends. Let us make them see you the real boss is!

An Appeal to Everyone, No To Con-Ass! Silence No More!

On to you now guys. So on the list of the congressmen who voted for the Con-Ass just by the mere shouting of Aye and Nay, is your own included on the list? What is your take on the issue of the lower congress passing a bill calling for a Constituent Assembly not recognizing the Senate as a separate chamber? What are we to do to all these congressmen, would you still vote for them come May 2010 elections? Be heard!

Related Posts You May Want Also to Read:

Graduates of Recession
Bloggers’ Journey Into Blogging
The Windmill of Philippine Educational System
Beware of this Text Scam!

“man is free, but anywhere he is in chains” jean-jacques rousseau